“I prefer to believe those writers who get their throats cut for what they write.” 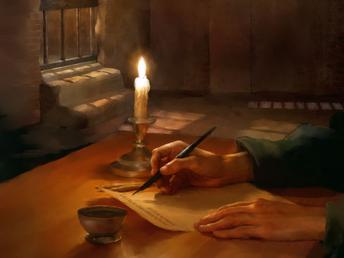 Did the Gospel Writers Tell the Truth?

One of the main objections I often hear when I go to speaking engagements, is that the Gospel writers Matthew, Mark, Luke, and John may not have accurately reported everything they saw and heard about the life of Jesus.

Even some Christians struggle with the idea that some uneducated, poor, simple, old followers of Jesus were able to recall exactly even the simplest details about Christ and then record them in the Gospels.

A few months ago, while I was answering questions at an event for college-bound high school graduates, a young Christian man bravely stood up and asked this question: “Hi Mark, my professor once told me that the Gospel writers couldn’t have jotted down everything about Jesus flawlessly because nobody can remember everything. My question to you is this: How do we know that the apostles gave us the truth and nothing but the truth when they wrote the four Gospels?”

“Where were you 15 years ago on Easter Sunday?”

The young graduate looked puzzled and said: “I have no clue.” Everyone in the room laughed.

“Where were you 15 years ago on your birthday?” I asked.

Again, he was puzzled and said: “How could I remember; that was a very long time ago.”

“Where were you 15 years ago on Christmas Eve?” I inquired.

“Oh come on, I really don’t know” he muttered.

I looked at the audience and repeated the same three questions to them, but not one single person remembered where they were on those days.

Moments later, I took a step closer to them, looked at the audience, and asked: “Where were you 15 years ago on 9/11, can anyone remember?”

Immediately, every single one of the listeners in the audience, including the young student, perfectly remembered, in details, where they were and what they were doing on that day.

The reason people accurately remember the details of certain events in their lives,  even several years later, is due to  what  is called an “impact event.”

An impact event is an experience or a situation that is so startling and climactic in someone’s life, that it will make them remember the details of the event for a very long time. An impact event touches the person so deeply that it fully changes them and their perspectives, views, or beliefs.

This is exactly the case with Jesus’ disciples. Up to the night of Jesus’ arrest in the garden of Gethsemane, all of them cowardly fled the scene and abandoned Jesus. A few months and years later, eleven out of the twelve fearful, timid, deserters willingly died for Jesus!

What changed? What did those disciples experience that turned them into brave and bold martyrs?

The only logical explanation is that they had an impact event- the resurrection of Jesus. The resurrected Jesus left such an impact on them that they instantly changed forever.

Take the Apostle Paul, for example:

In the beginning, Paul was a self-righteous religious zealot who assisted in the systematic murder of one of Christianity’s earliest messengers, a godly man named Stephen. Paul was the persecutor of early Christians until he experienced an impact event that changed his life forever.  On the way to Damascus (to kill more Christians), he actually witnessed the resurrected Christ. He was so deeply touched that later, he died for the sake of Jesus. How do you explain this sudden and strange conversion? Paul’s sudden and mysterious conversion is historically verifiable!

Keep in mind that when people experience impact events, two things will happen:

1) They will remember the details of the event for a very long time.

2) They will change their views and beliefs instantly.

The disciples spent three years with Jesus and witnessed extraordinary events and circumstances, such as His miracles. That’s why, when they wrote the Gospels, through the power of the Holy Spirit, they were able to remember even the sayings of Jesus.

I personally remember everything about 9/11, including what was said to me on that day. That was sixteen years ago. Why is it not logical to assume that the disciples also remembered details from years ago?

Here is another example of an impact event from the Bible:

In Luke 23:26, we read that a man, believed by some scholars to be black, named Simon of Cyrene was coming into the city when the Roman soldiers ordered him to carry the cross of Jesus because Jesus was too weak. “And as they led him away, they seized one Simon of Cyrene, who was coming in from the country, and laid on him the cross, to carry it behind Jesus.”

Now, remember, just like many Jews, Simon of Cyrene was a stranger who did not know Jesus in any way; but only came to visit the city, perhaps from Libya, to celebrate the Passover.

Later in the book of Acts, which was written after Luke’s Gospel, we read that Simon had become a follower of Jesus, and a teacher of the Gospel: “Now in the church that was at Antioch there were certain prophets and teachers: Barnabas, Simeon who was called Niger, Lucius of Cyrene, Manaen who had been brought up with Herod the tetrarch, and Saul” (Acts 13:1).

An important question comes to mind:

How and what lead Simon of Cyrene to become a believer and a teacher within months? Is it possible that perhaps Simon of Cyrene experienced a powerful impact event such as the resurrection of Jesus that changed him forever?

If you read the New Testament carefully, soon you will come to the conclusion that the writers did not fabricate the details or the events.  What was their motive? Why would they fabricate a story of a crucified and resurrected Jesus, and then get tortured and die for that fabrication? Who does that?

Why would they write down stories and include odd details about specific events that would surely make their case weaker and cause people to doubt them?

In those times, Jews did not accept the testimony of women and considered them invalid.  Amazingly, all four Gospel writers tell us that it was the WOMEN who discovered the empty tomb of Jesus first, NOT the men. Don’t you think the Gospel writers were concerned that no one would believe their resurrection story, especially if it was first told by women? Why did they write it down anyway?

The only logical conclusion that makes sense is that they told the truth. The women discovered the empty tomb first and that’s EXACTLY what the writers recorded, knowing the full consequence of their decision.  They could have easily come together and decided to alter the story and make one of the pivotal male characters, such as Peter or John, appear as the one to discover the tomb first. That way, everyone would listen to them and seriously consider their claim. They didn’t do that. They stuck to their story and later died for it.

The New Testament writers recorded difficult and embarrassing details that they could have easily avoided making their story seem more plausible.

If the writers were fabricating their stories, they could have made Jesus, their glorious leader, appear victorious and perfect in every way. Yet what we read in the Gospels is some embarrassing details that put Jesus in a bad position.  Mark writes that at one point, Jesus was called “out of his mind” by his own family members (Mark 3:21).  John records that some people even accused Jesus of being a deceiver (John 7:12).  Matthew records that one day Jesus even cursed a fig tree (Matthew 21:18-20).

Here is the question:
Why would the Gospel writers include these kinds of demeaning details which would do more harm than good to the image of their leader, unless they were telling the truth and nothing but the truth?

Here’s what I want to tell you.

There are so many more factors and reasons that lead me to believe that the Gospel writers told the truth of what they saw and heard, but I will leave them for another topic.

For now, I urge you to read the Gospels for yourself; examine the stories and the events mentioned, and apply the historical, prophetic, and archaeological tests to them and see how easily they pass with a remarkable grade. Then, apply the same standards to the writers of other religions, and decide for yourself!

Finally, next time someone tells you that the Gospels writers didn’t tell the truth when they wrote the New Testament, ask them:

“What did the Gospel writers benefit from lying?”

“Jewish authors would never have invented either that style or that morality; and the Gospel has marks of truth so great, so striking, so utterly inimitable, that the invention of it would be more astonishing than the hero.”
Jean Jacques Rousseau