“It’s easier to fool people than to convince them that they have been fooled.” 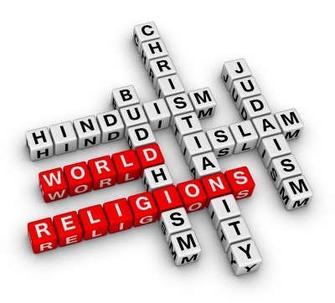 Whether from friends, family members, co-workers, or strangers, you’ve probably heard many times the claim that all world religions basically teach the same thing, and that world religions are the same at their core. I personally hear it almost every time I go to speaking engagements.  Even many Christians embrace and believe this false idea without knowing the truth.

It is absolutely stunning to me that when people make such a claim, I always ask them: “In what way do all world religions teach the same thing, and have you even studied any of the world religions?”

Their answer is often “well, not really, but I’ve heard it from so and so,” or “I read it somewhere,” or “someone told me.”

This amazes me because it shows how uninformed and apathetic those who make these outrageous claims are.

A few weeks ago, as I was driving and listening to an apologetics program on the radio, a listener, who identified himself as a church-going Christian man, called in and told the host that in a sense, “all religions are identical in their teachings” and that “they all promote love, peace, and forgiveness.”

What the Christian caller said did not surprise me at all, since I’ve heard it before. What stunned me was the answer the host gave him. I couldn’t believe what I was hearing. I was so shocked that I forgot where I was going and I missed my exit.

The host actually told the caller that “he agreed with him” and he also believed that “the God of the Bible is the same as that of the Mormons, Muslims, and all of the rest, because all religions have some identical truth claims!”

I could not stomach the nonsense that I was hearing! So, I decided to call the radio show and ask a few questions. After a few rings, I was put on hold. Then, a lady answered the phone, asked me what my name was, what my question was, told me to be brief, and quickly explained to me the rules, laws, and the guidelines of their show.

Moments after agreeing to their terms, I was live on the radio with the host:

Me:  Hi there, I actually don’t have a question I have a comment.

Host: Sure, go ahead.

Me: I believe all foods taste the same.

Me: I said, all foods taste the same.

Host: Okay…what does that have to do with apologetics or this show?

Me: Actually, a lot.

Host: How? What do you mean?

Me: Do you believe that spaghetti and meatballs taste the same as Chinese food?

Host: Sir, there are other callers waiting; please stick to the topic of the show.

Me: I am sticking to the topic of the show. Food and apologetics are the same. I’m not mocking you or anything. I am being serious. Do you believe that spaghetti and meatballs taste the same as Chinese food?

Me: Then why do you believe that all religions teach the same thing?

Me: Why don’t you believe that spaghetti tastes the same as Chinese food? What’s the reason?

Host: Because they don’t, I have tasted both!

Me: But wait a second, there are some identical elements like salt and peppers in both types of foods, so they should taste the same, no?

Host: Just because they both have the same seasonings in them doesn’t mean they taste the same.

Me: Earlier you told a caller that all world religions have some identical truth claims in them; therefore, they teach the same thing. Why is it not the same for food when they also have identical ingredients in them?

Host: Get to the point; what are you trying to say?

Me: With all due respect, your answer to the previous caller was incorrect and illogical.  If you know anything about world religions, you know that although they have some minor similarities, they all differ and contradict each other at the core. We know from the laws of logic that contradictory claims cannot be simultaneously true. Therefore, your absurd claim that all world religions teach the same thing, and that the God of the Bible is the same God of Islam and all of the others, is foolish and irrational.

Host: Would you like to quickly add anything else before we go to a short commercial break?

Me: Yes, have you ever even studied the world religions?

Beeeeeeeep. The host ended the call right there and moved to a break.

Honestly, my goal was not to embarrass the host on live radio; it was to show him the absurdity of his claims. It is one thing when you are misguided and uninformed; it is another to teach others your false ideas and beliefs that you know nothing about. That’s where the danger is: the blind leading the blind. Why do you think billions around the world are deceived when it comes to these matters of truth?

Whether you know it or not, on a larger scale, all world religions contradict each other in their teachings. Buddhists, for example, are not monotheistic because they believe all is God. Mormons believe we can all become gods. Muslims believe that Allah is the only God. Christians believe that Jesus is God. They believe that He is the son of God, who died on the cross for our sins, and that salvation is only through Him.

Jehovah’s Witnesses, Muslims, pantheists, and Christians all contradict each other. Jehovah’s Witnesses believe that Jesus is “a” god and deny His death on the cross. Muslims teach that there is no God but Allah and that Muhammad is the Messenger of God. This means professing the oneness of God, or ‘Tawhid’, and not assigning divinity to anyone but him. They believe that it is the ultimate sin to believe in the Trinity or pluralism (Shirk). They believe that it wasn’t Jesus that died on the cross, but someone who looked like Him. The Quran teaches that Jesus cannot be the son of God because God does not have any children. Muslims also believe that salvation is obtained when a Muslim keeps the five tenants of Islam, and when their good works outweigh their bad. Hinduism says that trying to get to Heaven is a waste of time; even if we were to spend some time in Heaven, we would eventually be reborn on earth, because we are trapped in a seemingly endless cycle of reincarnation. Salvation, according to Hinduism, consists of escaping this cycle altogether. Just from these few short teachings, how can anyone say that Christianity, Islam and the others teach the same things or that they have the same God when they clearly contradict each other?

I’ll give you another example.

Buddhists believe that the universe is eternal and that is has always been here. Christianity and Islam teach that the universe was created by God (not necessarily the same God). Science also gives ample evidence that the universe had a beginning, which is in total contradiction to all pantheistic worldviews. The ultimate goal of Buddhism is to eliminate all desires and ultimately achieve nirvana (amazingly, Buddhists fail to realize that to eliminate all desire is a desire itself, which makes the foundation of their view contradictory). The ultimate goal of the Hindu is to become free from the law of karma-to be free from continuous reincarnations. The only thing that matters is the soul, which will one day be free from the cycle of rebirths and be at rest. The ultimate goal of Christianity is to gain eternal salvation by having a relationship with God through faith in His son, Jesus. These views are not the same, and to believe that they are is ludicrous.

Whenever the claim of one religion directly contradicts, negates, or denies the claims of another religion, it follows that both of these claims cannot be simultaneously true; the formal laws of logic prohibits it.  Study the world religions, and you will soon realize that they are contradictory in so many ways. Muslims, Buddhists, Christians and other religious groups cannot all be experiencing the same God because the way they define God contradicts each other.

Next time someone tells you that all religions teach the same thing, agree with them, and then read to them Acts 4:12 that says: “Salvation is found in no one else, for there is no other name under heaven given to mankind by which we must be saved.”

If they agree with this verse, congratulate them for realizing that it is only through faith in Jesus Christ that we are all saved. If they disagree, ask them,

“How is it then that all religions teach the same thing?”

“Facts do not cease to exist because they are ignored.”
Aldous Huxley