“The only wolves we got to fear are the ones who wear man skin.” 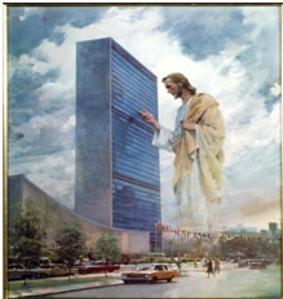 Jesus at the United Nations

One day, all the world leaders gathered for an urgent, emergency global meeting to discuss the dire situation on planet earth and examine the existential threats humanity is facing.

They dissected and discussed the crises in detail, but after nine days of arguing and yelling at each other, no conclusion was reached in any way, except for one. The majority of leaders voted to invite Jesus to the United Nations to ask him for help and seek his advice.

An invitation letter was immediately drafted and sent to Jesus via the World Wide Web.  Moments later, Jesus received a copy of the original memo that read:

Exactly a month later, Jesus arrived at the United Nations on time, and walked in; however, no one noticed him standing at the door since the entire room was in total chaos. The noise was immensely deafening as everyone was screaming and arguing with each other.

The Palestinian representative was throwing his shoes at the Israeli prime minister. The Chinese ruler was insulting the Taiwanese secretary of state. The Russian leader was threatening the Ukrainian headperson. The commanding officer of India was shaking his fist at the Pakistani ambassador. The European dignitaries were shaming the German counselor. The commander and chief of the United States was securing weapons deals with others. The president of Canada was weeping uncontrollably for more world refugees. The head of the Turkish cabinet was plotting new genocides to commit. The Scandinavian diplomats were welcoming more socialist ideas. The North Korean dictator was sobbing over the death of his Cuban communist, compatriot. The Italian appointee was taking selfies. The king of Holland was stoned, while the Japanese emperor was ordering sashimi.

Finally, after almost half an hour, the Pope of the Vatican turned around, looked at Jesus, and asked: “Hey…you, did you get me my frappuccino I ordered this morning?”

“What? I don’t work here”  Jesus replied and then scolded: “You claim to be holy, a saint, a teacher of the law, and you don’t know who I am? The other fools in this room do not recognize who I am because they do not know me, but you claim to know me, yet you don’t recognize me, and for that, your sin remains.”

“On your way back, get me a falafel sandwich,”  the King of Arabia ordered.

“Gentleman, please, STOP! I’m not a waiter or a cook, I am Jesus… You asked me to come here to help you!” Jesus exclaimed.

“You are Jesus? But you are not a white man with blue eyes!” the secretary of the UN wondered.

“If you are the crucified Jesus of Nazareth, then show us the nail marks in your hands and feet,” The African leader dared.

“See my hands and my feet? That is I myself; touch me and see for your selves, for a fake Christ does not have marks as I,”  Jesus assured.

“Fine, fine, who cares? Our schedule is packed and we are running short on time. Grab a chair and sit down. We have so much to do,” the vice-chairman of the UN rebuked.

Jesus smiled, pulled a chair, and sat right at the door by the exit sign.

The UN secretary pointed to Jesus and asked: “So, Mr. hmmm, what should we call you? You know, we do not mention your name anywhere anymore for fear of offending others.  People become very uncomfortable when your name is uttered. Since your days two thousand years ago, we have become very intelligent, open-minded, and tolerant…we have changed !”

“I concur; we all must be lenient and permissive because we have changed,”  the pope agreed.

“Then you haven’t changed at all,”  Jesus politely hummed.

“HOW DARE YOU? You are not here to lecture us, you are here only to answer questions,” a voice yelled from the back of the room.

“We don’t need to listen to a mad man who deceives people,” another leader shouted.

“CHARLATAN, CHARLATAN!” someone else yelled.

“Crucify him, crucify him now!”  the prime minister of Israel wailed.

Jesus stared at the floor, and said nothing…

“ORDER, ORDER!” The UN secretary wielded his gavel with force.

“How can you bring this evil man here Mr. Secretary?”  one of the world presidents exploded.

“This meeting is a waste of my time; I came all the way here from Tanzania for nothing,” the ambassador of Tanzania raged.

“We demand to receive our promised one hundred billion dollar check from all of you NOW!”  the official from Greece demanded.

“You won’t get anything from me unless we receive the missiles shipment first,”  the king of Bahrain vowed.

“I demand first rights to dig for crude oil in the African continent,”  the Venezuelan minister pleaded.

“No, no, no, we already purchased the rights, you stay away !”  the Qatari prince threatened.

The entire room got dead quite as everyone looked at Jesus’ empty chair, then looked at each other and said absolutely nothing.

Immediately, the Italian appointee quietly put his camera away. The Canadian president slowly wiped away his tears. The Dutch king finally woke up. The Pope quickly opened the Bible and pretended to be reading. The Japanese emperor stopped eating. The commander and chief of the United States was missing (on the golf course).

“LOOK, gentlemen, LOOK. There is a note left in the chair where Jesus was seated,”  the head of security announced, “it’s addressed to all of you.”

“What does it say, read it!” they asked together.

The head of security grabbed the note, walked to the middle of the room, and read: 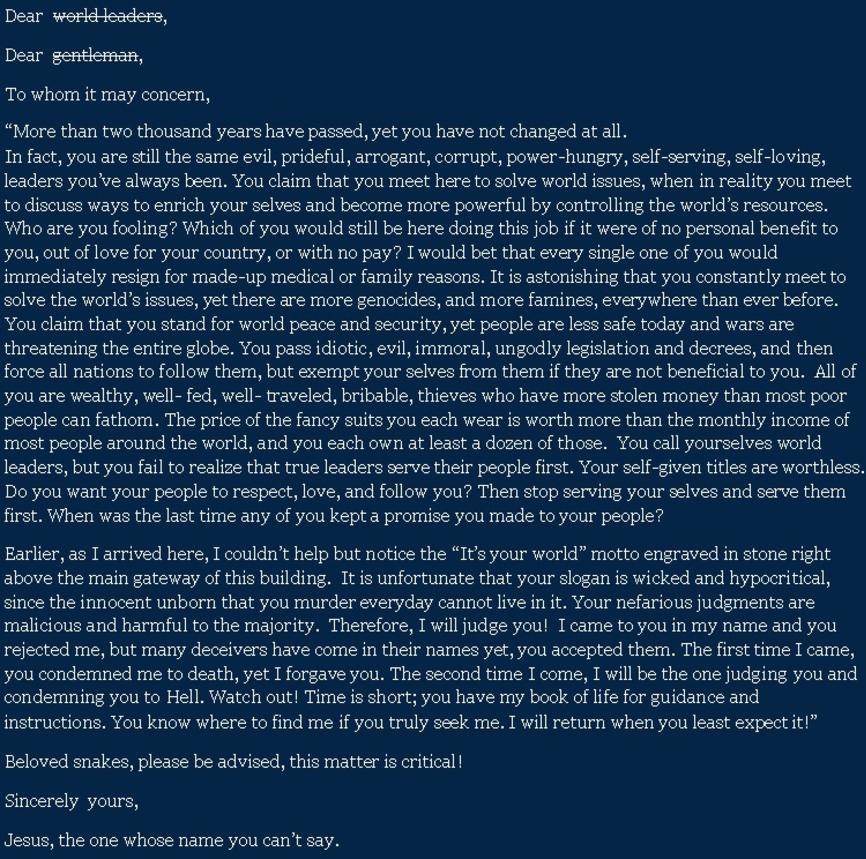 The more corrupt the state, the more numerous the laws.”

Bani Adam’, is a poem written eight centuries ago by Iranian poet Sa’adi, which today, decorates the gate of the United Nations building entrance :

“The sons of Adam are limbs of each other, having been created of one essence.

When the calamity of time affects one limb, the other limbs cannot remain at rest.

If you have no sympathy for the troubles of others, you are unworthy to be called by the name of a Human.”