[1] The questions at the heart of the cosmological argument are: ‘Why does anything exist? Why something rather than nothing?’ The argument is that unless God exists, this question is unanswerable.  The Cosmological Argument (also known as the Kalam cosmological argument), is a philosophical argument for the existence of God or a first cause that brought the entire universe into existence. It is a very effective argument in defending the philosophical position of theistic worldviews. The word “Cosmos” is a Greek word meaning, “world or universe.” ‘Kalam’ is an Arabic word meaning, “speaking”.

What Does the Argument Say?

According to Dr. William Lane Craig, the Kalam Cosmological Argument is stated as follows:

1. Anything that has a beginning has a cause.

2. The universe has a beginning.

3. Therefore, the universe has a cause.

Premise 1: Anything that has a Beginning has a Cause

Have you ever heard of the Law of Causality or the Law of Cause and Effect?  [1] It states that every material effect must have an adequate antecedent or simultaneous cause.  This law is evident in our experiences in life.  We live everyday as if things have happened because of prior causes.  When homicide investigators rush into a murder scene they want to know what caused the tragic event, telling them that the murder just happened is absurd.  When there’s a car accident the cause must be known to determine the party at fault.  Assuming the accident just happened with no cause is not reasonable.

If challenged on this premise, ask the person to provide you with a simple example of something happening without a cause. Or better yet if they say that they don’t believe in the law of causality ask them, “What caused you to believe this?”  Dr. Peter Kreeft  explains, “If there is no first cause, then the universe is like a great chain with many links; each link is held up by the link above it, but the whole chain is held up by nothing.”

[2] Dr William Lane Craig says that, “Premise (1) seems obviously true-at the least, more so than its negation. First and foremost, it’s rooted in the metaphysical intuition that something cannot come into being from nothing. To suggest that things could pop into being uncaused out of nothing is to quit doing serious metaphysics and to resort to magic. Second, if things really could come into being uncaused out of nothing, then it becomes inexplicable why just anything and everything do not come into existence uncaused from nothing.

Finally, the first premise is constantly confirmed in our experience. Atheists who are scientific naturalists thus have the strongest of motivations to accept it”.  Dr Craig is spot on here because we all know from our own experiences in life that food, gas stations, cars, and buildings, etc… don’t pop into existence out of nothing without any reason.  When was the last time a horse appeared out of nowhere and landed on the roof of your house ?

[3] Thomas Aquinas (1224-1274), in the 13th century, offered a clear and logical presentation of the cosmological argument.  He said that everything that comes into existence owes its existence to something else.  Nothing brings itself into existence or causes itself.  Once again, if we trace backward from the effect to cause, effect to cause, and so on, we will arrive at the uncaused first cause.

The first premise of the argument is logically sound.  let’s examine the second premise.

Premise 2 : The Universe Has a Beginning For centuries people believed that the universe was static, eternal, it always existed. In 1929 Edwin Hubble using the Hubble Telescope discovered that most galaxies are moving away from each other at very high speeds. The further away a galaxy is from earth, the faster it is moving. His conclusion was that the universe was expanding. If the universe is expanding that means it began to expand at some point where there was no expansion.  Rewinding the process (like rewinding a movie to the beginning) would ultimately take us to a single point of beginning where nothing beyond that point ever existed . That point is called singularity.  It was at singularity where the entire universe, space, time and matter exploded into existence. Here are two more pieces of evidence to show that the universe can’t be eternal.

Galaxy Seeds: Scientists believe that, if the Big Bang is true (first, there was nothing, then, BANG, something came into being), then temperature “ripples” should exist in space, and it would be these ripples that enabled matter to collect into galaxies. To discover whether these ripples exist, the Cosmic Background Explorer – COBE – was launched in 1989 to find them, with the findings being released in 1992. What COBE found was perfect/precise ripples that, sure enough, enable galaxies to form. So critical and spectacular was this finding that the NASA lead for COBE, said, “If you’re religious, it’s like looking at God.”

A flashlight is another analogy that will help understand this law. If you leave a flashlight on overnight, what’s the intensity of the light in the morning? It is dim, because the batteries have used up most of their energy. The universe is like a dying flashlight. It has only so much energy left to consume. But since the universe still has some battery life left (it’s not quite dead yet), it can’t be eternal—it must have had a beginning—for if it were eternal, the battery would have died by now.

The Second Law is also known as the Law of Entropy, which is a fancy way of saying that nature tends to bring things to disorder. That is, with time, things naturally fall apart. Your car falls apart; your house falls apart; your body falls apart. (In fact, the Second Law is the reason many of us get “dresser disease” when we get older—our chest falls into our drawers!) But if the universe is becoming less ordered, then where did the original order come from? Astronomer Robert Jastrow likens the universe to a wound-up clock. If a wind-up clock is running down, then someone must have wound it up.

[8] Albert Einstein’s theory of relativity suggested that the universe had a beginning and was not eternal as he had previously believed. His theory shows that the universe is not a cause, but instead one big effect—something brought it into existence. Einstein disliked his end result so much that he introduced a “fudge factor” into his theory that allowed for an eternal universe. But there was only one problem. His fudge factor required a division by zero in his calculations—a mathematical error any good math student knows not to make. When discovered by other mathematicians, Einstein admitted his error calling it “the greatest blunder of my life.” After his acknowledgment, and upon confirming further research that showed the universe expanding just as his theory of relativity predicted, Einstein bowed to the fact that the universe is not eternal and said that he wanted “to know how God created the world.” 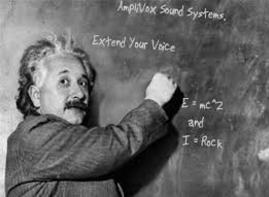 The bottom line is this: Since there was an absolute beginning to space, time and matter, it is reasonable to conclude that the cause of the universe must be spaceless, timeless and immaterial. This cause must also be personal in order to choose to create, have intelligence to create such a fine-tuned universe, and be powerful in order to create out of nothing. A spaceless, timeless, immaterial, personal, intelligent, powerful being is exactly what theists call “God.” [9] “There are not many options – essentially just two. Either human intelligence ultimately owes its origin to mindless matter; or there is a Creator. It is strange that some people claim that it is their intelligence that leads them to prefer the first to the second”

[5] Harvard House/scientific evidence for a beginning

[6] Got questions.org / Evidence for the universe