“If you tell a big enough lie and tell it frequently enough, it will be believed.” 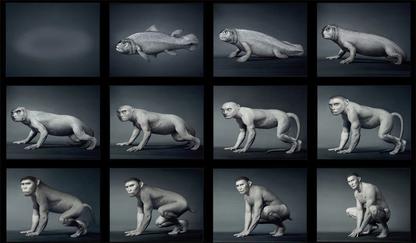 Last year, as I was lecturing about the design argument to a large group of people, a polite gentleman raised his hand for a question and opined: “Humans were not created. I am a biologist; my specialty is zoology and biology, and as a scientist, I can tell you that all life on earth evolved from a first single and simple cell around 3.5 billion years ago.”

“Very well sir,”  I smiled: “You say that all life evolved from a single cell billions of years ago. My question to you is this: where did the first single and simple cell come from?”

“The primordial soup. Water, rocks, chemical reactions, plus billions of years and probability” he exclaimed.

“You call that science? That’s blind faith” I countered. “Where did the rocks and the water come from?” I insisted.

“They appeared out of nowhere” he screamed.

“They appeared out of nowhere just like that? You believe in magic, not science sir.” I countered.

Skeptics like my polite friend quickly forget that even the first single and simple cell (amoeba) is not after all that simple. There was a time in the past where it was believed that the simple cell amoeba was not complex at all, and that natural forces could have caused it.  Today, however, with the aid of modern technology, we know that this is not true because the amount of information in a simple cell amoeba is equivalent to ONE THOUSAND complete sets of encyclopedia Britannica. Even the atheist and evolutionist Richard Dawkins, agrees with my statement and admits that an amoeba’s DNA = language.

We know that language comes from a mind only. Where then did the language in the DNA of the simple cell organism originate?  To believe that natural laws are the cause of DNA with all its complexity, is like believing that a hurricane passed through a salvage yard and produced a red convertible Ferrari… It just doesn’t make sense.

With a smile on my face, I asked him: “Where did the very first Ford Mustang come from? Also, was it designed by an intelligent designer or did it just somehow, assemble, fabricate, organize, and build itself over time?”

The skeptic told me that if enough time is given, cars, skyscrapers, computers, rockets, and even living things can assemble themselves. I wonder if he thinks the same about his children or his bank account!

We all know that every building needs a builder. Every painting needs a painter. Every program needs a programmer. Every designed thing needs a designer; this also applies to the DNA.

Why is it that evolutionists read a simple thirteen letter long sentence such as John loves Mary, and assume that there is an intelligent mind behind the message, but then look at the DNA with its billions and billions of letters, all in the correct order, and assume chance and natural causes?

Contrary to common belief, not all Christians and Christian apologists reject evolution. I myself for example, believe in micro evolution, but completely reject Darwin’s theory of macroevolution. Before I explain why, let me point out the difference.

Microevolution refers to changes in the gene pool of a specific type. This is scientifically undeniable because it happens every day. I prefer to call this ‘adaptation’. Examples of such microevolutionary changes would include changes in physical characteristics, coloring, and certain bacteria’s resistance to pesticides and antibiotics. For example, if you stay exposed to sun light for long times; your skin will eventually turn darker due to changes in your body, so your body will respond to the environment accordingly.  In other words, your body will adapt.  I believe in microevolution because it is observable and testable.

It is worth noting, that the most common factor of microevolution is natural selection in response to different environments. The changes within the gene pool DO NOT result in newer species, meaning, there is no change in kind. You will not get a polar bear from a frog or a camel from a butterfly.

Some evolutionists will tell you that the strongest evidence for macroevolution is the fruit fly experiment. I remember few winters ago, when one night I stopped at a full service gas station to get gas for my car; I struck up a conversation with a young , college employee who told me he was working part time to pay for school (biology major). When I asked him if he believed in God, and what he thought of evolution, this is what he said:

“God? God is for people who believe in fairy tales. I believe in reality, in science, and of course I believe in evolution.  All life on earth evolved from a simple cell billions of years ago, and the biggest evidence to supports this is the fruit fly experiment.”

Since I knew where he was going with this, I interrupted him with a question. “The fruit fly experiment? What is that?” I asked.

“Ooo, I’m glad you asked” he answered, then continued: “Because fruit flies (drosophila), reproduce many generations in a very short time, scientists picked them for the experiment to compress thousands of years of `evolution’ into a few years of lab work, and it worked! After breeding millions of fruit flies in a controlled lab, scientists were able to observe many mutations and speciation.”

“Well yes, but they showed mutations” he nervously whispered.

“Mutations are not the same as complete new species, are they?” I shot back. “One more question as you pump gas in my car. The scientists that you say performed the fruit fly experiment, didn’t they use their intelligent minds to do their tests, or was it was all an unguided, undersigned, random experiment performed by the laws of nature? Also, where did the very first fruit fly come from?” That’s when the conversation ended since my biologist friend wasn’t paying attention and he spilled gas all over my shoe.

The part that evolutionists like to ignore is that despite all kinds of attempts by scientists including radiation, NONE of the characteristics formed a new species. Even though hundreds and hundreds of mutations were created, the mutations were within the same species, and many of the flies developed negative side-effects. The experiments proved that the mutation of any of these core developmental genes―mutations that would be essential for the fruit fly to evolve into any other creature―merely resulted in dead or deformed fruit flies. This, therefore, showed that fruit flies could not evolve.

Mutations always involve a loss of genetic information. Macroevolution requires the creation and addition of  completely new information into an existing genetic structure. Micro-evolution is merely the alteration of pre-existing trait or traits within any species group, and always involves the loss of genetic information. The fact of micro-evolution cannot be used to substantiate the plausibility of macro-evolution, as they require mechanisms completely opposed to one another. There is not any scientific evidence that confirms the event of information increase in the genetic code of any organism.

Darwin’s theory of evolution is the world’s greatest fairy tale. It is not scientific, and there is no factual basis for it at all. It is nothing but blind faith mixed with theory, and speculation. Spontaneous generation is impossible because you cannot get something from nothing. Life could not have started spontaneously from inorganic matter. Darwin’s belief that all species evolved billions and billions of years ago from a primeval slime, and then the species continued to evolve through the process of natural selection in which nature allowed only the fittest to survive (ironically, sheep survived and dinosaurs went extinct), is exactly like the blind faith evolutionists accuse Christians of having.

Next time someone tells you that intelligent design is a fairytale and that evolution is scientific, ask them if they can provide you with a single piece of evidence of change of kinds in species? Ask them if they or anyone else has ever observed Darwinian evolution? If they didn’t observe, repeat, and test the process, how is it scientific? (The scientific method must be observable, testable, and repeatable).

Evolutionists refuse to even consider intelligent design because they know that if life is designed, then there must be a designer behind it all. If there is a designer, then the designer must also be very intelligent, and very powerful…just like God!

That is something they will never accept. Why do you think they don’t teach creation and brainwash your children in schools with the evolution fairy tale only?

“A lie can travel halfway around the world while the truth is putting on its shoes.”