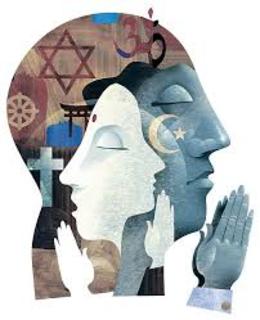 The Insanity of Pluralism

My friend Linda, a math teacher and part time employee at one of the organic food chain stores that I randomly visit, expressed to me the other day that after 55 years of looking, “she’s finally reached a point in her life where her search for truth is completed because she has finally found it.”

When I asked her what she was talking about, this is what she told me:

“Mark, there is nothing more liberating than to know that our fates are in our hands. We make our destiny by being good humans. We must all peacefully coexist in this world. We must all love and tolerate each other, no matter what the faith or the belief. Therefore, I no longer believe in one single religion as the one and only true religion, but rather, I believe that all religions are true; we all have our own paths, there is no right or wrong paths, as long as you do it with love and peace, it’s all good and it’s all accepted. That’s why I started going to a new church that teaches and preaches pluralism, love and tolerance. I’m sorry to say this, but your Jesus stuff is kind of old and boring compared to what we believe and do in our church. ”

I kept quiet for a few seconds, and then asked her: “What church do you go to that teaches  all religions are true?”

She thanked me for wanting to know and explained: “We believe that no one faith has the right answer. We the Unitarian Universalists, are Buddhist, Christian, Hindu, Humanist, Jewish, Muslim, Pagan, Atheist and agnostic, who are believers in God, and more. On the forefront of Lesbian, Gay, Bisexual, Transgender, inclusion for more than forty years, we are people of all sexual orientations and gender identities. We are people of all ages, people of many backgrounds, and people of many beliefs. We create spirituality and community beyond boundaries, working for more justice and more love in our own lives and in the world.”

“So basically anyone from any background, religion, or view can attend your church because everyone will be welcomed, loved, and most importantly tolerated?” I added.

“Exactly! we tolerate all views; we do not discriminate against anyone or any belief. Jesus is welcomed, Muhammad is welcomed, Joseph Smith and all the others as well are welcomed,” she concurred.

“Answer me this then” I pleaded. “What if I come to your church, get on the pulpit, and announce to everyone that my view is that abortion and homosexuality are wrong, and that there is no other way to God other than through Jesus. Will you and your church tolerate me and my belief?”

“NO!!! You can’t say mean things in our church, you can’t offend others by making inflammatory, offensive, exclusive claims like that” she yelled.

“So, you are not tolerant to all views then. You are only tolerant to some views.” I challenged.

“No, no, no. We are tolerant to all views” she objected.

There was a moment of silence on Linda’s side. Then, suddenly she responded: “Well, we don’t claim that no one religion has the truth, but rather, we believe that all religions have truths” (although earlier that’s exactly what she claimed).

I giggled a little, and then clarified: “Linda, they all contradict each other. It is okay for your church to include Muslims, Christians, Buddhists, Mormons, and Atheists, that’s fine. We all must get along and love one another- I get that. The problem is that you guys think that you can tolerate each other’s views, have contradictory beliefs, and still have the same truth. That’s a logical impossibility. Take your class room of math students for example: suppose that you believe 2+2 = 4. One of your students believes that 2+2=7. A second student believes that 2+2=18. Another believes that 2+2=412. Would you correct your students, or you would let them believe whatever they want because you do not wish to offend them? In the same way, your Unitarian Universalist Church is doing a great job promoting love, tolerance, and equality, but it is doing a terrible job promoting truth. It’s actually promoting pluralistic  insanity.”

Linda became very agitated as she loudly exclaimed: “Mark, you are correct that those mathematical answers cannot be equally valid. However, the law of non-contradiction does not apply to religions; it only applies to other aspects of life and reality.”

“Why doesn’t it?” I challenged.

“Because it doesn’t,” she shot back.

“Because it’s rude, primitive, angry, and very offensive to take one way and disregard all the other beautiful ways. How dare you tell me that Unitarian Universalism is wrong and Christianity is correct! ” she yelled.

“If it is primitive, angry, and very offensive to take one way and disregard the others, why then do you accept Unitarian Universalism, and find it appealing, since it does the very same thing you are complaining about? It is actually saying it’s “my way,” which is that there is no just one way. To claim otherwise is NOT permissible. Do you not see how contradictory and self-defeating that is? Not only that, when you say that the law of non- contradiction does not apply to religions, do you know what law you are using to contradict me? You are actually using the law of non- contradiction to deny that the law of non contradiction applies to religions!” I pressed.

Linda accused me of being too philosophical. After a good twenty minutes of a back and forth discussion, it was obvious that she was relentless, and wasn’t going to back down from her views and beliefs.

I ended the conversation, wished her luck, and walked away. (Remember, as apologists, it is not our job to convert skeptics, we can’t-we are not the Holy Spirit. Our job is to show them bits and pieces of truths, and let God complete the picture in full when and how He sees fit).

It’s been more than two months since I last saw Linda. May be I should call her and invite her out to sushi, but instead, order her fast food that I know for sure she hates. If she complains, I’ll tell her that it’s an all- inclusive restaurant and she cannot be intolerant towards different types of food. Let’s see how long her Unitarian–Universal tolerant views will last!

Pluralists like Linda are mistaken in basing truth on their personal emotions and experiences. Pluralism is a belief which, on the outside, sounds loving, peaceful, tolerant and really great, but on the inside is decayed, contradictory and illogical. Sadly, most people promote and believe pluralism based on what it represents on the surface, which is appealing, but simultaneously disastrous.

Liberals, for examples, are notorious for this kind of nonsense. They build their entire reality of life on a foundation made from paper and thin air. They are unable to reason logically because their beliefs are emotional, not logical. Liberals want you to accept truth based on how THEY feel about things, not based on facts or evidence. The moment you feel differently, they are outraged and offended, and immediately demand facts. When you disagree with the way they feel, facts no longer matter anymore. Emotions reign supreme. Suddenly you are a narrow-minded bigot because you are unrespectful to their feelings. When you present them with logical and reasonable arguments, they can’t reason with you because they think with their hearts and not their minds. Their starting point is emotional, not reasonable.

My friend Linda is exactly the same. Her new church makes her feel great. She’s happy (for now) because she is emotionally filled, but mentally bankrupt. To her, it matters not that there are clear and serious contradictions in what her church teaches.  To her, it matters not that the foundations of her views are based on quick sand, soon to gallop her worldview into a deep, dark, black hole. All she cares about is that it feels good. Therefore, we all must accept her views. Sadly, such a path always leads to a cliff. She just doesn’t know it yet…

Imagine four people on a bus, the first passenger believes he is heading to the beach, the second passenger thinks he is going camping, the third passenger assumes he is going to the movies, and the fourth passenger is convinced that he is on his way to a concert. Wouldn’t you call that bus the “nutty bus?”

It doesn’t matter how happy the passengers feel because they THINK they are going to their desired destinations. What matters is the truth. Where is the bus driver actually taking them?

This is exactly the case with Unitarian Universalism. On a given Sunday, they actually get on the pulpit and teach that Jesus is right, although He said He “is the only way to the father.” Muhammad is right, despite him contradicting Jesus by saying that Islam is the only way to Allah. Hinduism is right even though it claims all is God since God is everywhere. These claims separately are okay. You can’t claim that all of them will lead to the same God.

Do you see the problem here? How can the members of this organization (I don’t like to call it a church) not see these serious flaws in their teachings? Perhaps we should call this church the nutty church?

World religions and faith systems are similar. Although most of them claim that they alone are the correct path to God, logically that can’t be true because they all contradict each other in many ways. It amazes me that there are so many people, mostly Christians, who believe that “one way” is “too narrow” or “too exclusive.” Why? Because such people completely neglect logic and reasoning, and cling to their emotions and feelings.

Have you noticed that those who claim that they can coexist with anyone are the ones who will NOT coexist with you if you disagree with them for coexisting with others?

“These are the days when the Christian is expected to praise every creed except his own.”