“Then you will know the truth, and the truth shall set you free.” 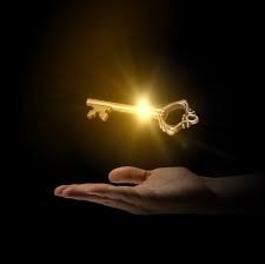 Ask anyone today if truth exists, or if it can be defined, and see how fascinating and edgy the conversation will get in a second.  Ironically, we live in a pluralistic post-modern world where truth is subjectively recognized, widely suppressed, and regularly denied.  It is astonishing to me that in this day and age people actually believe in two contradictory assumptions as equally accurate.  You have probably heard someone tell you “I have my own truth and you have yours” or “all religions are true.”   The problem with these types of statements is that they are opposing and mutually exclusive by nature. Thus, they can’t logically be both true, and therefore, they are self -defeating.  Two opposing statements can’t be equally true at the same time and in the same sense.  You can’t be a married bachelor, either you are married or you aren’t.  The color red can’t be red and not red at the same time (politicians can’t be politicians and honest at the same time). These are logical impossibilities. In the same way, people can’t have their own truth, and all religions can’t be all true because they contradict each other. (The law of Non-Contradiction). 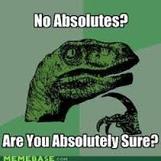 The Greek word for “truth” is ‘aletheia’, which means to “un-hide.”  Philosophically, it’s whatever corresponds to reality, [1]  or, as Merriam-Webster’s dictionary defines it “In the state of being the case.”   This means that if something is true, it can’t be false, and vice versa. 2   Is it possible to know what truth is?  To find truth, we can begin at the most basic and undeniable premise, “Being.”  In fact, if you are reading or hearing this, you have proven this first basic premise of truth.  The mere fact you can question truth or question yourself means you exist.  Is it true that we exist? To think about the answer proves we exist.  Existence proves the state of reality. To think about yourself proves reason.  These are two  axioms, undeniable facts; I exist, and I reason.

That’s exactly what she did !  Truth is an unavoidable reality because it is in God’s nature. We can’t make a truth claim and deny it at the same time because the moment we deny it, we actually affirm it.

Can you imagine living in a world where truth is not absolute, but constantly changing?  Can you visualize a universe with wavering laws of nature, a cosmos in which gravity pulls the physical  world on weekends only? Conceptualize living on a planet where the day before Thanksgiving, your mother cooks a great family turkey dinner, but on Christmas eve, she doesn’t because she’s your uncle?

On a flight from D.C. to London last summer,  I sat next to a very bright college math professor from Boston; for hours, we discussed various topics and world views.  When the issue of truth came up, the professor assured me that truth was relative and changing. That’s when I interrupted: “I agree with you professor, because according to my truth right about now we are actually flying to South Africa and not London.”  It didn’t take him a very long time to realize that truth can’t be subjective.  Imagine, a college math professor that believes 2+2 = 4 is true today only but will change to another answer tomorrow? Does he also teach what he believes?

If something is true, it is true for me you and everyone else, regardless of whether it is believed or not. The conundrum for pluralists is that if truth were relative, then their own statement about truth being relative would also be wrong. Why?  Because when they make a statement saying that “truth is relative” they are stating it absolutely not relatively.  If truth is absolute, they are wrong.  If truth is relative, they are also wrong because their statement is also relative.  This why all forms of relativism including moral relativism are contradictory.

In the same way, truths about faiths and beliefs are also absolute and not relative.  All religions can’t be equally true and valid at the same time, because they are contradictory.  Here’s the crux of the matter:  Jesus clearly stated that He is the truth, and only through Him can people enter Heaven.  If this is true (which it is), then every opposing belief and faith must be and is logically false.  Islam, Mormonism, Buddhism, atheism and all the others are wrong.  It’s unavoidable, since logic demands it.  Next time someone tells you that there are many ways to God, or that all roads lead to heaven, explain to them the absurdity of these claims and meekly and logically refute them.  Remember, they are not the enemy they are just blind! 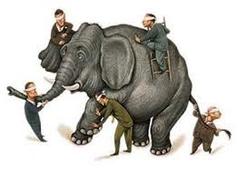 [1] There is a popular analogy used to show that truth is subjective and all religions are equally valid. Religion professors especially love this philosophic analogy, because it equalizes all religions, making all religions equally “true” in their description of God. [2] The basic argument goes like this: there are several blind men who all encounter an elephant. One of the blind men is feeling the trunk of the elephant, and thinks the elephant is like a snake. The second blind man disagrees, because after feeling the side of the elephant, he believes the elephant to be more like an immovable wall. The third finds the first two ridiculous, because after feeling the leg of the elephant, he does not think for a second the elephant could be like anything other than a tree. And the fourth man disagrees as well, feeling the tail was more like a skinny broom. Therefore, none of the blind men are wrong per se, because they have different views and experiences of the same thing. The argument assumes that religious people are just like the blind men feeling the elephant, just encountering the same truth in different ways. This can be a convincing argument and an analogy hard to defend. But, does this argument hold up to logic and truth? [3] The thing about this analogy is that there is in fact a correct reality (the elephant) and that the blind men were all incorrect (to varying degrees) about their perception of that reality. In other words, not all perceptions are equally valid. Furthermore, if a sighted man came along, and was able to prove his seeing credentials, then we might be inclined to give his description of the elephant more weight. Christianity differs from other religions because its Founder claimed to Know God in his fullness and not in part.

1. Truth is discovered, not invented.  We didn’t invent the laws of mathematics and physics; we discovered them.

2. Truth is transcultural.   2+2 = 4 is true for every culture regardless of their beliefs.

4.  Truth is not whatever makes people feel good.  Bad news can also be true.

5.  Truth is not what is believed.  A lie when believed is still a lie.

7.   Truth is not whatever is intended.  Good intentions can still be wrong.

Why is Truth Important?

Truth is crucial for everyone, without exceptions because wrong decisions have consequences.  A doctor that gives a patient the wrong amount of medicine can kill the patient. Boarding the wrong flight can take you closer to your in-laws instead of Hawaii.

It is interesting to note that those who make the claim about truth being unimportant in life are the ones offended most when truth is suppressed from them. The minute they are lied to about something personal, they are suddenly truth seekers.  They can’t live out their own beliefs, because deep down in their hearts, they know that truth exists; they just choose to conceal it.  I often wonder how chaotic it would be for a society to be in darkness for only one night because it lacked light.  Then I am baffled by a man that lives his entire life in darkness because he rejects truth.

After searching for years, I have come to the ultimate conclusion, that man will search for truth his whole life without finding it, but that the moment he looks to the person of Jesus Christ he will find truth, and the truth will set him free.

Since we are on the topic of truth, I must truthfully admit that nonbelievers are not the only ones who struggle with truth.  Most Christians also fail to recognize and understand it, hence all the false Christian doctrines and strange denominations.  I personally know pastors who will not tell the whole truth to their congregation for fear of losing members.  This is deceitful !  Those appeasing pastors avoid mentioning words like Hell, damnation, eternal fire, and repent, because “we must be loving and more welcoming to everyone” they say.  The harsh reality is that knowing the full truth, yet presenting parts of it or keeping others from being fully exposed to it is not loving at all.  It is actually cunning and very devious.  Imagine John the Baptist or Peter manipulating truth and preaching what the majority of modern-day pastors preach to make sinners feel good and comfortable?  In the court of law, you are to tell the whole truth and nothing but the truth, 99% of it is not acceptable.  A pastor should not measure success by how large his church is, but by how God’s truth is largely preached.

Tell it: In full, never suppress or be ashamed of it, even if it is going to cost you.

Remember it: To forget it, is to forget what you stand for.

Understand it: The more you do, the closer to God you will get.

Teach it:  Jesus commanded us to go and make disciples, not believers.

Honor it:  If you honor your parents, how much more do you need to honor God’s truth?

“Every truth passages through three stages before it is recognized.  In the first, it is ridiculed, in the second it is opposed, in the third it is regarded as self-evident.

[1] Answers In Genesis.org / What If People Deny truth

[2] Truthnet.org / is truth objective or subjective?