“There are more sure marks of authenticity in the Bible than in any profane history.” 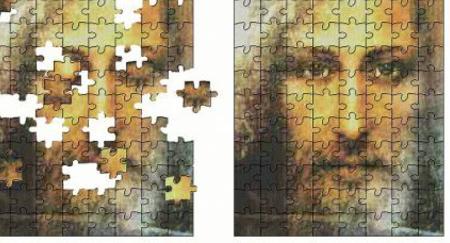 Suppose that on a rainy, cold day, you are walking the streets of Washington D.C. with three of your friends, when suddenly, you witness a major car accident involving a yellow taxi cab and a black limousine. The next morning, the police show up at your door to ask a few questions and obtain a full report of what you saw.

If the police obtain reports from all four of you, it is reasonable to assume that there will be some minor differences between all four reports. For example, you might tell the police that you witnessed a yellow car hit a black car but fail to mention that the vehicles were a taxi cab and a limousine. Just because you forgot to mention some crucial details doesn’t mean that your report was false, and it certainly doesn’t make you an untrustworthy witness.

Perhaps one of your friends will fill in the gap of your incomplete testimony in her report and tell the police that she saw a taxi cab and a limousine, but fails to mention that it was a cold, rainy day. This doesn’t make her contradict your report, on the contrary, it strengthens your report by adding the details that you missed in your report.

Another friend might tell the police that she saw a car accident, but forget to mention the color or the brand of the vehicles, only focusing on the drivers who were yelling at each other.

Just because some of the reports have incomplete information, or minor differences between them, doesn’t mean that any of the reports are false in any way, shape, or form. You and your friends unanimously agreed that there was an accident. Each report contains some details missing in the other reports, so the reports fit together like pieces of a puzzle.

That’s exactly how an authentic report works; you will have minor differences in the details since people are different and pay attention to different details. If you have multiple reports from eyewitnesses who claim to witness a certain event, and all of the reports are identical in every way, then most likely, the reports are copied, which makes the story or the event ungenuine and unreal. In the four Gospels, for example, one writer fails to provide complete details of what they witnessed as to why, where, and how certain the events took place. It seems as if it’s a mystery because the missing information makes it hard to understand the events completely. However, the confusion disappears when another witness fills in the gap and clarifies the missing information, thus, making the story easier to understand. These examples are called undesigned coincidences. An undesigned coincidence happens when one part of the Bible is missing a detail that makes us ask a question, and another part of the Bible (written by another writer), or a text external to the Bible, without collusion, supplies that missing detail and answers our question. It is a test for historical authenticity.

Let me give you a few examples to study. (You can email me for more examples).

The Beating of Jesus

In Matthew 26:67-68, we read that the Roman soldiers mocked Jesus and struck him on the head. “Then they spat in his face and beat him; and others struck him with the palms of their hands, saying, “Prophesy to us, Christ! Who is the one who struck You?””

Missing information and mystery: Why did the Roman soldiers ask Jesus to prophecy as to which of the soldiers hit him? They were right in front of Jesus; isn’t it odd that Jesus couldn’t see them and he needed to guess who hit him?

Matthew doesn’t tell us why, because his report is missing some details. However, Luke solves this difficulty by adding new and different details to the same report.

In Luke 22:64 we read: “And when they had blindfolded him, they struck him on the face, and asked him, saying, ‘prophesy, who is it that struck you?’”

Now we understand why Matthew tells us that the soldiers asked Jesus to prophecy, because Luke adds the detail of Jesus being blindfolded, he couldn’t see, so they wanted to know if a real son of God would be able to accurately prophecy! Puzzle completed.

Jesus and the Miracle of Wine

In the village of Cana, Jesus was invited to a wedding. After a while, Jesus’ mother informs him that they have run out of wine. In John 2:7 we read: “Jesus said to the servants: ‘“Fill the jars with water’”; so they filled them to the brim.”

Missing information and mystery: Why were the jars empty to begin with? Who hosts a wedding, especially in the Middle East, and does not have enough food or drinks? (Notice that John tells us that Jesus commanded the servants to fill the jars, which is evidence that for the jars to be filled to the brim they must first have been fully empty).

If we only had the Gospel of John, we would never know the answer to this puzzle. Lucky for us, Mark adds the missing detail and solves this problem easily.

You see the reason the jars were empty: Mark reports that the water was used for washing by the Jews. Two reports, different information, authentic and logical testimony.

When Jesus was taken to Pilate before his crucifixion, he was tried illegally (which we will cover in depth when we study the six trials of Jesus). However, something strange and mysterious happened during this trial.  In Luke 23:3-4 we read: “So Pilate asked Jesus, ‘“Are you the king of the Jews?’” “You have said so,” Jesus replied. Then Pilate announced to the chief priests and the crowd, ‘“I find no basis for a charge against this man.’”

Missing information and mystery: Wait a second; Jesus just clearly confessed that he is the king of the Jews, so why did Pilate announce to everyone that he finds no basis for a charge against Jesus?

This is equivalent to a murderer confessing his crime to a judge, and then the judge announcing to everyone that the murderer is innocent. Isn’t it odd?

Aha! Now we understand why Pilate found no guilt in Jesus. John fills the gap in Luke’s report by telling us that Pilate had nothing to fear since Jesus clearly posed no threat to his throne by saying that his kingdom was from another world. Pilate perhaps giggled at Jesus’ words and considered him to be a lunatic for thinking that he comes from a kingdom not of this world, so he decided to let Jesus go.

The Feast of the Passover and the Miracle of the Bread

John recalls that at the time of the Jewish Passover, Jesus went up to the mountain with his disciples, when a multitude of people followed them. Jesus, as always, had compassion on the people, so he did the expected, by asking help from an unexpected person!

In John 6:4-5 we read: “Jesus went up on the mountain, and there he sat down with His disciples. Now the Passover, the feast of the Jews, was near. Therefore Jesus, lifting up his eyes and seeing that a large crowd was coming to him, said to Philip, “Where are we to buy bread, so that these may eat?”

Missing information and mystery: Why does Jesus ask Philip, an unknown and a minor character where to buy food? Why didn’t Jesus ask his major, solid followers like Peter, John, or Matthew for help? Why Philip?

The puzzle is easily solved when John himself gives us the answer a few chapters later as he clarifies that the reason Jesus asked Philip for help and no one else is that Philip is actually from Bethsaida, so he knew his way around and where to get food from. In John 12:21 we read: “They came to Philip, who was from Bethsaida in Galilee, with a request. ‘“Sir’, they said, ‘“we would like to see Jesus.’”

Now it makes perfect sense as to why Jesus asked Philip’s help, except, how do we know for sure that where Jesus went up to the mountain was actually in Bethsaida?

Another report confirms the story of John when Luke says: “When the apostles returned, they reported to Jesus what they had done. Then he took them with him and they withdrew by themselves to a town called Bethsaida, but the crowds learned about it and followed him. He welcomed them and spoke to them about the kingdom of God, and healed those who needed healing.”  (Luke 9:10-11).

Jesus on the Mount of Transfiguration

One day, Jesus took Peter, James, and John with him to the mountain and allowed them to see something truly magnificent and supernatural.

In Luke 9:28-36 we read: “About eight days after Jesus said this; he took Peter, John and James with him and went up onto a mountain to pray.  As he was praying, the appearance of his face changed, and his clothes became as bright as a flash of lightning. Two men, Moses and Elijah, appeared in glorious splendor, talking with Jesus. They spoke about his departure, which he was about to bring to fulfillment at Jerusalem. Peter and his companions were very sleepy, but when they became fully awake, they saw his glory and the two men standing with him. As the men were leaving Jesus, Peter said to him, ‘“Master, it is good for us to be here. Let us put up three shelters—one for you, one for Moses and one for Elijah.’” (He did not know what he was saying). While he was speaking, a cloud appeared and covered them, and they were afraid as they entered the cloud.  A voice came from the cloud, saying, ‘“This is my Son, whom I have chosen; listen to him.’  When the voice had spoken, they found that Jesus was alone. The disciples kept this to themselves and did not tell anyone at that time what they had seen.”

Missing information and mystery: Why did the three disciples decide to keep what they saw to themselves? Wouldn’t anyone run to their friends and tell them their supernatural viewing?

Well, this time the puzzle is solved by Mark, when he says: “As they were coming down the mountain, Jesus gave them orders not to tell anyone what they had seen until the Son of Man had risen from the dead.”  (Mark 9:9)

Sometimes, the details of a story are too amazing to be coincidences. The undesigned coincidences in the Gospels are evidence that the writers did not in any way forge or alter their reports about what they saw.  Each writer wrote an independent account apart from the other, yet they all came together to prove each other as being authentic.

An undesigned coincidence is an apparently casual, yet puzzle-like “fit” between two or more texts, and its best explanation is that the authors did not fabricate the event, but actually knew the truth about the events they describe or allude to. Connections of this kind among passages in the Gospels, give us reason to believe that these documents came from honest eyewitness sources, people who actually witnessed the event.

“There’s no better book with which to defend the Bible than the Bible itself.”